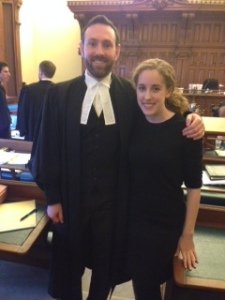 In Hopkins v Kay, the plaintiffs allege “that approximately 280 patient records of the Peterborough Regional Health Centre were intentionally and wrongfully accessed by the Hospital, Sir Sanford Fleming College and seven employees of the Hospital without the consent of the patients”.

Ian Matthews and Jonathan Lisus for the defendant employee argued that the court’s jurisdiction is not ousted but merely delayed. They asserted that it was an issue of sequencing.  http://www.counsel-toronto.com

There are three possible outcomes. Either the court determines that the Personal Health Information Protection Act is an exclusive code, the court has delayed jurisdiction, or that there is concurrent jurisdiction between the court and the Information and Privacy Commissioner.

It is unlikely that the Court of Appeal will find that the Personal Health Information Protection Act is an exclusive code. There is no explicit clause that ousts the jurisdiction of the court, and the legislation does not provide for an adequate remedy to victims.

It is also unlikely that the court will determine that individuals may only launch a lawsuit in the Superior Court after the Information and Privacy Commissioner has dealt with the matter. The judges’ questions revealed compelling concerns regarding issues of access to justice that would arise from a finding of delayed jurisdiction.