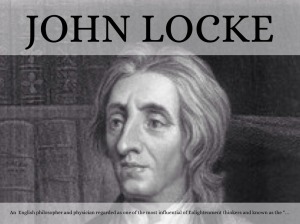 “Every man, wherever he goes is encompassed by a cloud of comforting convictions, which move with him like flies on a summer day.” Bertrand Russell

In western democracies, John Locke’s theory of the Blank Slate serves as a cloud of comforting convictions, which helped inspire the famous line “Life, Liberty and the Pursuit of Happiness.”

The Blank Slate refers to the idea that people’s minds are born empty and become shaped by experience. Steven Pinker writes that “Locke was taking aim at theories [in which people were thought to be born with innate talents and the divine right to rule] … His alternative theory, empiricism, was intended both as a theory of psychology – how the mind works- and as a theory of epistemology – how we came to know the truth.”

The doctrine of the Blank Slate underlies much of political philosophy and even extends to setting the agenda for social sciences, which explain feeling, thought, and behaviour as a product of socialization.

In the Happy Lawyer, Nancy Levit and Douglas Linder present a different view of human nature by referring to the discipline of evolutionary psychology. Evolutionary psychologists argue that people are shaped by evolution. And evolution has not designed us to be happy all of the time.

From an evolutionary standpoint, being in a persistent state of contentment would not be a recipe for reproductive success; that is, it is more important to have a brain that sends the message “Danger!” than to have one that says “Be happy”… Nature has programmed us to better recognize the negative than the positive.

Evolutionary psychologists further postulate that people are born with a certain temperature point (satisfaction level), which we deviate from a few degrees either way. We may deviate far under extreme circumstances like the death of a loved one. But, eventually we all return to our set temperature. (It must be noted that evolutionary psychologists do not dispute the plasticity of the brain.)